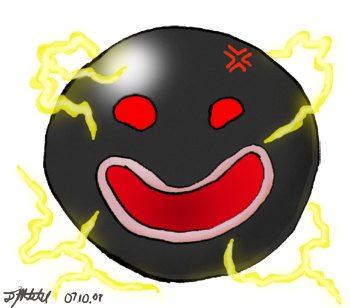 BACKGROUND: An Amp is an electron-like monster consisting of an electrified steel ball with glowing red-orange eyes and mouth. Like electrons, they tend to orbit certain objects, crystals being their favorites.
Amps are suspended in mid-air by some unknown force, possibly by manipulating their seemingly unlimited energy to create anti-gravity. Then again, a lot of things defy gravity in the Mushroom Kingdom's universe if you think about it.

EVOLUTION: Amps haven't changed much in appearance, but in behavior. Amps were first made by Bowser's troops to guard the alternate realities created in the paintings of Peach's castle in Super Mario 64. Amps reappeared when Bowser Jr. was given a chance to try to kidnap Peach. But Bowser Jr. had a hard time keeping the energetic monsters under control, perhaps to have more control over them, he had the next batch made immobile, and used them to make wire fences difficult to climb.
Amps return with their original, faceless design in Super Mario Galaxy. As in Super Mario 64, they usually patrol a small circular area, especially near poles.