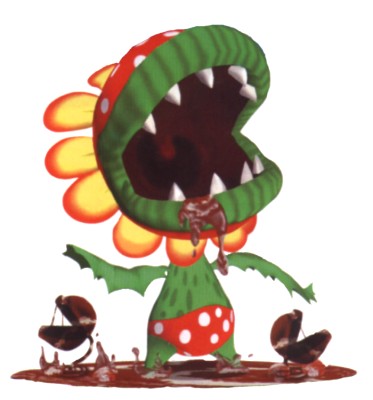 BACKGROUND: Petey was a misunderstood Piranha Plant. One day he found a Shine Sprite and took it for himself and decided to hide on top of a Windmill in Bianco Hills and would shoot sludge and Piranha Plant heads would roll down the windmill. After Mario came and thrashed him he decided to take out his rage on the little village on the foot of the Windmill in Bianco Hills. Mario came again and thrashed him.
Petey Piranha was first seen in Super Mario Sunshine. At first, he actively sprayed goop from the top of a windmill in Bianco Hills. Later on, Petey struck back by covering Bianco Hills in goop - again! Somehow, Petey was so bored he fell asleep. When Mario woke him up, he began flying. He flew around throwing up paint. After being defeated, Petey ran off to practice some Sports skills.
He has returned several times to compete in various sporting events and still occasionally fights Mario and the other Mushroom Kingdom heroes.

EVOLUTION: Petey first appeared in Super Mario Sunshine where he could spit all kinds of nasty goop and fly.
In Mario Golf for the GameCube, Petey arrived late and so joined the team of golfers as a hidden character. He proved to be the strongest known golfer in the entire kingdom.
Next up came the biggest challenge of them all; Mario Kart: Double Dash!! Teaming up with King Boo, he was able to use any character's Special Item. His standard kart was the Piranha Pipes. Some players refused to play against Petey, as the "using all Specials" Special ruined the point of specials altogether. Petey was reportedly disqualified and not allowed to enter the Nitro or Retro Grand Prix.
Petey now started using his Goop powers in Sport. In Mario Power Tennis, Petey was once again unlockable. At this point, he was already viewed as one of the regulars of the Mario universe. His Power Shots revolved primarily around the use of paint.
Petey again appeared as an unlockable character in Mario Superstar Baseball. He appears to have developed a love for competitive sport. Interestingly, information from the game states that Petey was created by a mutation caused by "The Piranha Boss" - whether referring to Petey (as a Boss character) or to another, higher-level of Piranha, is as of yet unknown. It also shows that Petey's leaves evolved into primitive wings.
In Mario & Luigi: Partners in Time, Petey appeared as the boss of Gritzy Caves. This time, Goop was nowhere to be seen. Suggesting that he was around long before Mario Sunshine (in terms of Chronological order, not game order), although there may have been two different Peteys over the years. Petey ate Princess Peach and Kylie Koopa but the Mario Bros. saved them.
Finally, he also appeared in the game: Super Princess Peach, this time without Goop powers, but retaining his ability to Fly. Petey Piranha seems to have developed almost as many skills as Mario himself. In this game he was referred to as "Boss Piranha Plant".