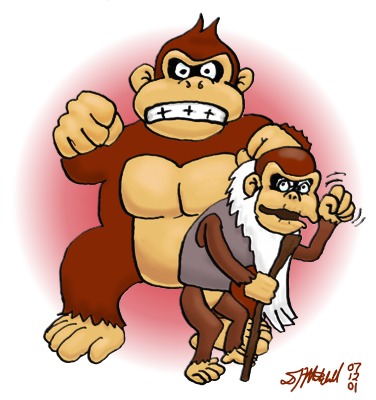 SKILLS AND ATTACKS: He is an accomplished chemist on the DK isles.

STRENGTHS: He used to be strong. He's good at being crotchety.

WEAKNESSES: He used to be dumb.

BACKGROUND: Today, there is Donkey Kong.
Yesterday, there was Cranky Kong.
Cranky Kong is debatedly the original Donkey Kong from the days when Mario lived in New York and dated a woman named Pauline instead of Princess Peach. While Nintendo may say otherwise, Cranky is convinced he was the prime primate back in the day, so we'll go with his story. Sometime between Donkey Kong and Donkey Kong Jr. he settled down with Wrinkly Kong and had a son who would rescue him after being locked up by Mario.
Today, Cranky Kong is retired, and spends his days helping his son, the current Donkey Kong, along with his now deceased wife, even though he sees Donkey as much lazier.

EVOLUTION: Back in Donkey Kong and Donkey Kong Jr., Cranky was muscular and about the size of Bowser from Super Mario 64. Today, he's the stereotypical old guy: he spends most of a time with either a cane or a rocking chair and has a long beard.