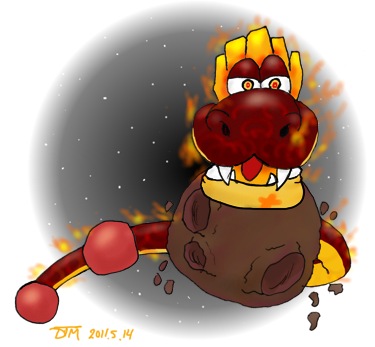 STRENGTHS: His body is on fire, he's huge and hard to outrun.

BACKGROUND: When Gobblegut was defeated, Bowser decided to recreate him and give him another chance. Bowser also wanted to make him a lot tougher than his previous version. So, he threw Gobblegut into a volcano and thus gave him the ability to resist fire and even Gobblegut himself was now covered entirely in fire. Because of his fiery body, Fiery Gobblegut was one of the toughest bosses during Mario's second space adventure.
Fiery Gobblegut can create pools of lava when he crashes into a planet and breathe fireballs. He appeared in the secret mission "Snacktime for Gobblegut" in Battle Belt Galaxy.