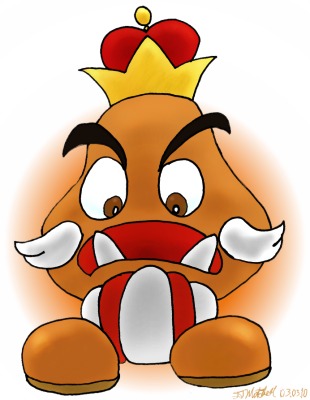 STRENGTHS: He's huge...that's about it.

WEAKNESSES: He's a bit stronger than a regular Goomba, but otherwise he shares most of the same weaknesses.

BACKGROUND: King Goomba was once an just a regular, bossy Goomba, but when Bowser gained control of the Star Rod, he begged the Koopa King to transform him into a King among Goombas. After being transformed into the large, powerful King Goomba, he and his best friends the Goomba Bros. were put in charge of guarding the area where Mario fell after his battle with Bowser.
The Star Rod made King Goomba many times larger than an ordinary Goomba. He wears striped pants and a regal crown, and he grew a royal moustache to complete his new look. Unfortunately for King Goomba, the blast from the Star Rod didn't make him any smarter, and he isn't even that much stronger than an ordinary Goomba. Mario and Goombario defeated him easily.
Since losing to Mario, King Goomba has grudgingly reformed, and can be seen playing with the Goomba Bros. and occasionally helping out around Goomba Village.