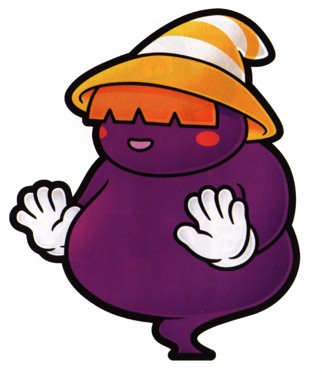 STRENGTHS: Can move quickly when in the shadows and has a high attack.

WEAKNESSES: Her attacks are easy to guard after you get used to them.

BACKGROUND: The three Shadow Sirens have been sent by the X-Nauts to dispose of Mario and take the magical map.
The middle sister, Marilyn, controls the element of thunder. She is best described as the strong, silent type.
Marilyn hardly ever speaks, but when she does, she says the word "Guh!" and other variations. She has a very high attack power, so watch out! It is also unknown why Marilyn follows Beldam.