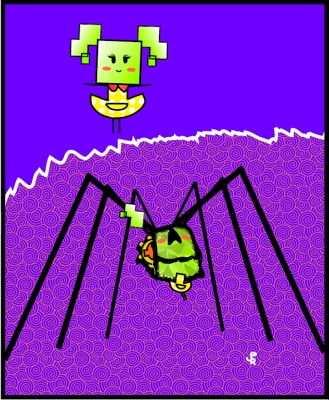 STRENGTHS: Impossible to damage when you first battle her, she can climb to the ceiling.

BACKGROUND: Mimi was once a cute little girl who was given the power to transform when she discovered a cavern of Rubees. But, it had a costly effect, and she was turned into a hideous looking spider. She soon learned how to cast spells with Rubees to allow her to switch between her two forms at random, make people stay places for eternity, and more. She always has an arsenal of Rubees wherever she goes.
Mario and friends first saw Mimi in Merlee's Mansion, acting as Merlee's handmaid. They learned of Mimi's plan to enslave those who wander into the mansion by making them pay debts and work for Rubees. Finally they learned her true form and beat her.
Mimi reappeared in Sammer's Kingdom to battle our heroes yet again. This time she appeared in her old form, with the power to flip between dimensions, just like Mario. When Mario & co. beat her, the whole dimension collapsed on them, only to be saved at the last minute by Tippi.
Our heroes' final battle with Mimi was in Bleck's Castle, where Peach beat Mimi's horrible true form and then saved Mimi from falling in a pit. Mimi's lifelong dream is to make a stable of cutie-pies to command.