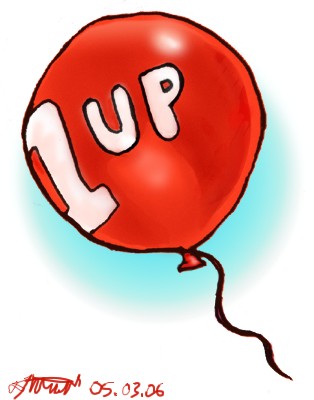 WEAKNESSES: Can be eaten.

BACKGROUND: Mock-Up is a balloon with a clever device that allows it to Pop before Yoshi gets too close. It also has 1-UP written on one side, and is red or green. Mock-Up appears on the right hand side of the screen (or left) and it inflates, revealing itsself. Often, before you can so much as move, it pops! After it pops, a Fly Guy may come out. But if you are fast enough to eat the Mock-Up before it pops, you will get a 1-Up.
Seriously, what was the POINT in these enemies? Some cruel joke played by the Koopa Troop? Mock-Up has never appeared in another game since Yoshi's Island.