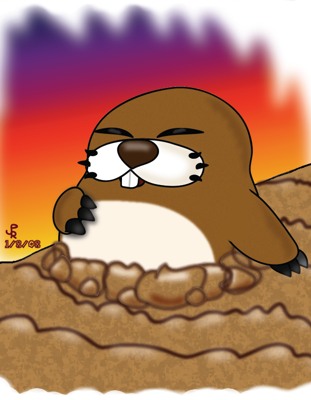 STRENGTHS: He can hide in his burrow and throw rocks at you.

BACKGROUND: Monty Moles are pesky rodents that have appeared in several Mario games. They can be either harmful or helpful, as some moles are more civilized. They spend a lot of their lives underground, leading to the belief that they have poor eyesight. This is not true however, as they have participated in sports like baseball and soccer.

EVOLUTION: Monty Moles first appeared in Super Mario World. These moles were aggressive and would jump out of the ground when they sensed danger. They returned in later titles such as Super Mario 64 and Paper Mario. In both of these games the moles would throw rocks at Mario.
In Super Mario Sunshine, Monty Mole returned as a major enemy, piloting a huge, triple gunned tank. This was the first portraying of Monty Moles having technological intelligence. They returned in Super Mario 64 DS and Yoshi's Touch n' Go in a more traditional form.
Monty Mole's latest appearance was in Super Mario Galaxy. These moles were much larger, meaner, and sported spiky helmets. Mario could not jump on them but had to dislodge them from their holes with a ground-pound.
Monty Mole has also had cameo appearances in Mario and Luigi, Mario and Luigi 2, Mario Party Advance, Mario Superstar Baseball, New Super Mario Brothers, Mario Party 7, Mario Party DS, and Mario Strikers: Charged. (Whew!)