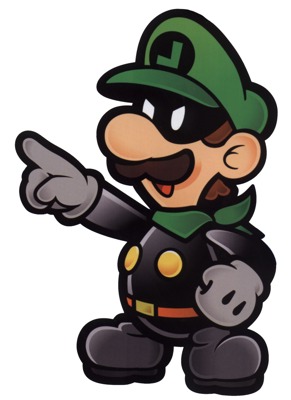 WEAKNESSES: Jumping on his head.

BACKGROUND: After Luigi was sent to another dimension (Castle Bleck) Count Bleck brainwashed Luigi and turned him into Mr. L.
Mr. L was to destroy Mario, Peach and Bowser. Mr. L fought Mario with his Brobot, however after Mario destroyed it, Mr. L wanted revenge and created another Brobot. After Mr. L was defeated once more, Dimentio showed up and Mr. L said he couldn't show up to Count Bleck defeated. Dimentio aid not to worry and that he would kill Mr. L.
Mr. L was sent to the Underwhere - where he got his memory back. Mr. L became Luigi again and reunited with Mario.