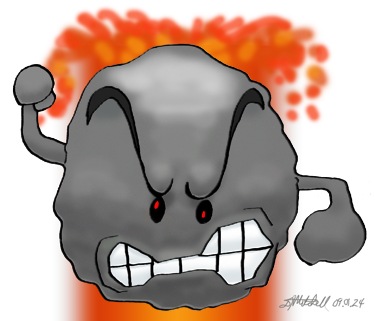 SKILLS AND ATTACKS: Can split into four and throw boulders.

BACKGROUND: When Professor E. Gadd used his Hydrogush 4000 to put out the volcano and save the Mario Bros., Mrs. Thwomp and her husband got very angry because Mr. Thwomp's favorite hobby was jumping into volcanoes. Since there was no more lava, it was just a mountain, and they could not tolerate this. The Mario Bros. tried to persuade her that it wasn't their fault but she did not believe them.
After the brothers beat Mrs. Thwomp in battle, Mr. Thwomp was kind enough to listen to their story of needing to save Princess Peach and gave them a ride to the center of the volcano. Contrary to her name, Mrs. Thwomp does not look like an ordinary Thwomp; she looks more like a large, round boulder.