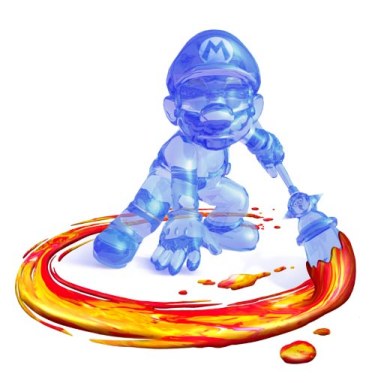 STRENGTHS: He gets harder to beat over time.

BACKGROUND: It all starts in Peach's private jet. Mario, Peach and Toadsworth are watching the tour of Isle Delfino when she sees Shadow Mario jumping in the background. Then when they land on the airstrip, she sees him again on top of the filters. Peach looks at Mario and Toadsworth, looks back and Shadow Mario is gone! Shadow Mario has a magic paintbrush. It was made by Proffessor E. Gadd, the same person who made Luigi's vacuum and Mario's water backpack! When he draws with it, goop ejects from the bristles.
The first time you defeat him, he runs to the statue in Delfino Plaza Paints an "M" with little " at the top and escapes through it! Fludd tells you to spray it with water and then a glow comes out and inside it looks like a tour of Bianco Hills and then jump in. When you get 10 Shines, he kidnaps the Princess again. But this time he puts her in a boat, lashes his tounge at you and drives off to Pinna Island. When you get the first Shine Sprite at Pinna Park, he reveals himself as Baby Bowser! He looks as if he is made of water and so does his paintbrush.