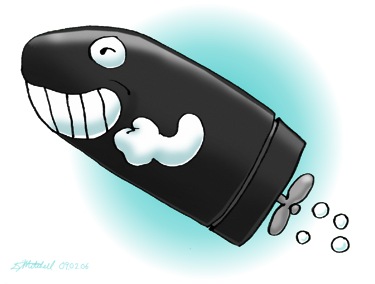 BACKGROUND: Torpedo Teds were thought to only reside in Soda Lake in Dinosaur Land, but have more recently been sighted in aquatic areas around Vibe Island. Torpedo Teds are closely related to Bullet Bills, though unlike their air bound counterparts they are much rarer and larger in size. Since the black boxes carry large amounts of torpedoes they are probably rather heavy so are not used as often. The Koopa Troop only uses them when underwater areas need to be heavily guarded.