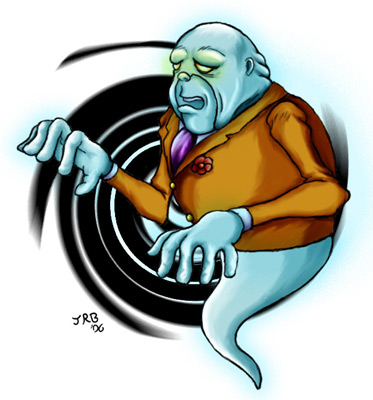 STRENGTHS: Hides surprisingly well at the beginning of the game.

WEAKNESSES: Has no will to fight.

BACKGROUND: A lover of dark places, Uncle Grimly hid himself away from the outside world when alive. He believes himself to be scary. So much that he vainly tries to scare himself in front of a mirror. He's a bit thick though, not many people found him scary, in fact, he seemed to forget why he was stood there. When Luigi discovered him during the mansions's blackout, he was surprised that someone had found him, yet not been scared of him. It shocked him so much that he didn't even fight Luigi, he just stood there in front of the mirror until Luigi put him out of his misery. He is 45 years old.