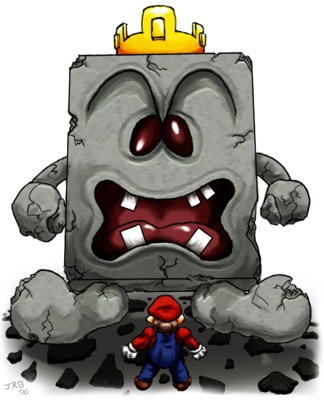 STRENGTHS: Has a tough stone body protecting him from frontal assaults.

WEAKNESSES: Has a huge crack in his back.

BACKGROUND: The Whomp King is surprisingly tough to novice players - unless you've already taken on his minions. He - unlike many Bosses in the game - does not obsess over some wacky new mustache. Instead, he obsesses over how no-one ever says thank you to a brick after using it to build/make something. Unlike other Whomps, you can't jump through him.
Whomp King resides at the highest point in Whomp's Fortress. However, once Mario topples him, he is replaced by a huge tower. Wonder where the bricks came from...