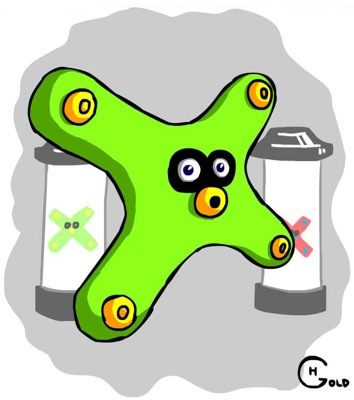 SKILLS AND ATTACKS: It can shoot an impenetrable barrier around itself.

STRENGTHS: It cannot get hurt, until you destroys it's barrier.

WEAKNESSES: When it's barrier is destroyed, it has no protection and can be defeated easily.

BACKGROUND: Yux are creatures created by an X-Naut Phd. Yux were created to help the X-Nauts with security from enemies. They live with the X-Nauts in space, but some Yux moved to the Mushroom World.
A Yux protects itself by shooting out Mini-Yux. Mini-Yux create a barrier around Yux so Yux cannot get hurt. If all Mini-Yux are defeated, the barrier gets destroyed and Yux stands unprotected. Yux can also protect itself by shooting out energy-rings. Yux stores energy to shoot these rings. By having a barrier around itself and shooting energy-rings to hurt enemies, Yux can get pretty dangerous. There are multiple types of Yux.