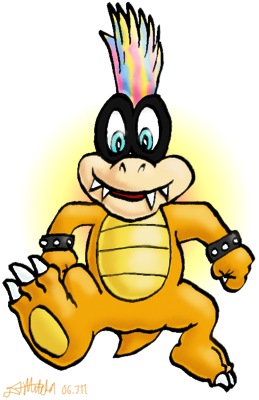 WEAKNESSES: Hates being jumped on.

BACKGROUND: Iggy is the fourth oldest out of the Koopalings and usually is somewhere in the middle of the seven to fight. He is also the weakest in most games. Iggy is quite a good jumper and looks JUST like Lemmy! He wears glasses and has a green or blue shell, depending on the game. He also invents stuff, but nothing as complex as what Ludwig does. Iggy is also a bit nuts. In Super Mario Bros. 3, Iggy was the fourth boss and was demoted to first in Super Mario World.

EVOLUTION: In his first appearance Iggy was blue with orange and white hair and large glasses. He returned in Super Mario World with white hair that was combed backwards.
In Mario and Luigi, Iggy's appearance changed to be exactly the same as the artwork had always depicted him: green-shelled and with a forward-pointing rainbow mowhawk.
In New Super Mario Bros. Iggy became a little taller and got a green "palm tree" style haircut. He's the only Koopaling to change significantly from his original look in New Super Mario Bros.