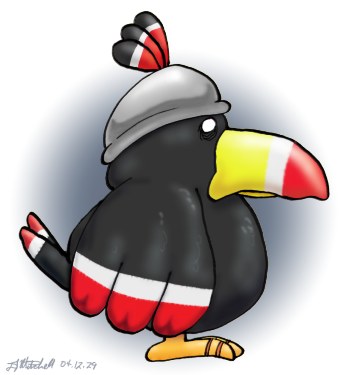 BACKGROUND: Dodo is cursed to live a life of servitude to the overbearing Valentina. Nobody knows why Dodo puts up with the witchy woman's bossy behaviour and annoying attitude, but he seems to do all of her dirty work even though it makes him grumpy.
In spite of all the work he does for Valentina, Dodo has become enormous from laziness and overeating. Maybe he's just too lazy to leave Valentina! He has black feathers with some white and red accents and a large, colourful beak. He wears a decorative helmet to signify his status as second in command of Valentina's troops, although since they were chased out of Nimbus Land, there aren't a lot of troops to command anymore.
In spite of his size, Dodo can still fly, but he's pretty slow and not overly dangerous on his own. Incredibly, Dodo is an ordained Minister in the Mushroom Kingdom Church and nearly managed to wed Valentina and Booster.