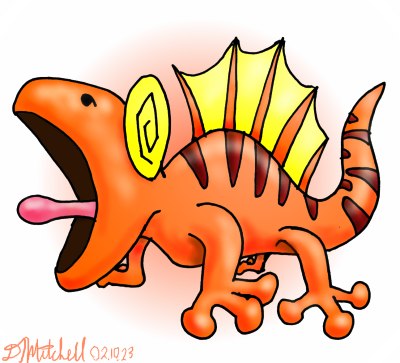 WEAKNESSES: Weak against Fire attacks; they are easily confused.

BACKGROUND: Geckits are orange lizards that inhabit the mountains around Land's End. They are orange with bright yellow eyes and a yellow fin on their backs. These monsters are very low on intelligence and often get confused when confronted by an enemy. They are even known to attack themselves in battle! These monsters shouldn't pose much of a threat, but they live in large groups and could be dangerous because of their sheer numbers.
Geckits are usually wild. Because of their low intelligence they are fairly easy to tame, but if a villain tried to use these monsters for fighting, he or she would soon find that their stupidity in battle makes them more trouble than they're worth. In the wild Geckits are adapted for living in very hot climates, and when they get too warm they look for shady areas or caves to cool off in.