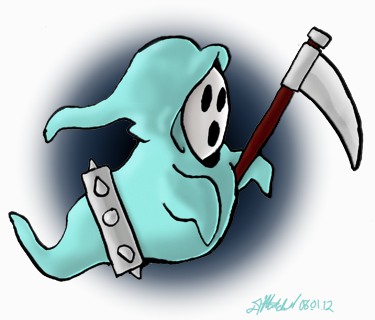 BACKGROUND: Glum Reapers are death-inducing ghosts with a strong resemblance to Greapers. Their exact origin is unknown, and they are exceedingly rare in the Mushroom World (although many were found in the Smithy factory according to Mario and Princess Peach).
At a glance, the only obvious difference between a Glum Reaper and a Greaper is that the Glum Reaper wears light blue instead of orange. The truth is Glum Reapers are quite a bit stronger and more resilient. True to their Grim Reaper namesake, they can instantly kill even battle-hardened adventurers.