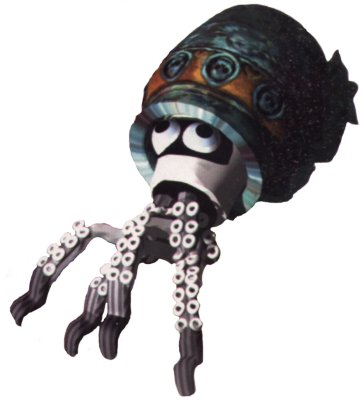 STRENGTHS: King Calamaris are strong against Sleep and Silence, and his their heads are

WEAKNESSES: Fire and terror. Their tentacles are also vulnerable.

BACKGROUND: King Calamari was a giant Sea Blooper. Legend has it that he took the sunken ship he lived in down himself, and remained to make it his home and torture the ghosts of his victims.
The giant creature has a large jewel-encrusted crown that protects his head, it was most likely made from treasure being transported by the ship's crew. While King Calamari took the ship for his own, the shark pirate Jonathan Jones and his crew managed to claim a piece of the ship for themselves.
A few years later, relatives of King Calamari started popping up around Isle Delfino. Sometimes these creatures are referred to by the locals as "Gooper Bloopers", but they are the same species of giant Blooper as King Calamari.