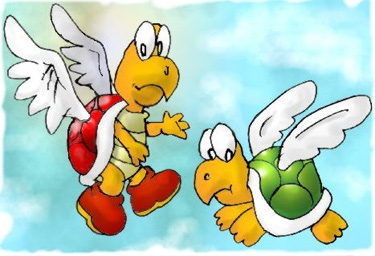 STRENGTHS: Their shells offer some protection, and they are sometimes difficult

WEAKNESSES: They are susceptible to most attacks - especially jumps.

BACKGROUND: Winged versions of regular Koopas, these guys aren't quite as numerous as their ground-bound counterparts, but they are more dangerous due to their flight capabilities.
Koopa Paratroopas make up the bulk of Bowser's flying underlings. They can be quite dangerous, especially when attacking in groups. Green ones, are particularly dangerous because they are bad at maneuvering. You might call them kamikaze pilots....they bounce around, and the speed and height of their jumps varies from one to another.
As with regular Koopa Troopas, Paratroopas' shells can be used by Mario, he just has to ground them with a stomp first.

EVOLUTION: Koopa Paratroopas have followed much the same path as regular Koopas. In the early games, they flew about with all fours dangling, but in later games they started "standing" whilst flying.
Then, in Super Mario RPG, they went back to they "all fours" style. At the same time, they started going by the name "Sky Troopas", which lead some to believe that perhaps all-fours Paratroopas and standing Paratroopas are actually seperate species. However, considering the similar pattern of change in regular Koopas, it is likely that they are the same.
Like their groundling cousins, Paratroopas have become quite rare recently. There were no Paratroopas to be seen at all in Super Mario 64 or Super Mario Sunshine.
They did however make an apperance in Paper Mario. Some Paratroopas now work for the Mushroom Kingdom postal service. Some of the followers of Bowser have started wearing sunglasses and spiked collars to set themselves apart from "good" Paratroopas.
In Mario & Luigi the Bean Bean kingdom contained a wild cousin of the Paratroopa called Paratroopea. They are half-plant Paratroopas, which are believed to have gotten that way by eating Bean Fruit. They seem to be less intelligent than regular Paratroopas, and will probably get their own section in the compendium in the future.