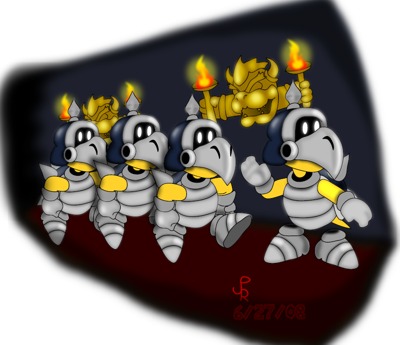 STRENGTHS: It has strong armour and the spike on its head is used for both attacking and defending against jump attacks. It can Shell Spin

WEAKNESSES: With the armour, it's very slow when running.

BACKGROUND: Koopatrols are Koopas that are more trained and stronger then the others. Thoose Koopas gets this uniform and they are used to guard Bowser and his castle. Most Koopa Troopas dream of becoming Koopatrols, becouse Koopatrols are high-ranking guards with a huge intelligence and strength.

EVOLUTION: Super Mario RPG introduced the first prototype for Koopatrols, called Terrapins. They wear suits of armour and they walk on two legs. Their armour covered their eyes, but they still had green shells.
Koopatrols made their return with a new name in Paper Mario, when they were guards for Bowser. They also had grey shells with spikes on the back, and you can barely see their eyes through their helmets.
Koopatrols where found again in Paper Mario: The Thousand-year door, when they lived in Rougeport Sewers after Mario and his team clear Chapter 5. They were a little more detailed than in the previous game.
Koopatrols also made apperances in Super Princes Peach (as living statues), Super Paper Mario and in Mario Land Pinball.