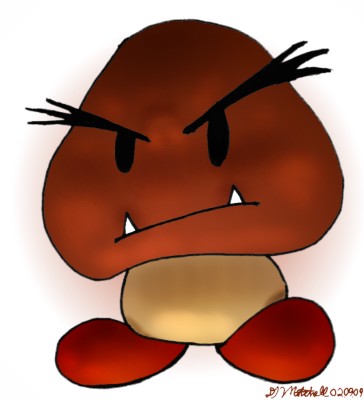 BACKGROUND: Micro-Goombas are tiny Goombas. They look just like regular Goombas only they are much smaller. In spite of their tiny size, many Micro-Goombas are incredibly strong, and should not be taken lightly. Some of them can cause serious harm by biting their enemies, and others are strong enough to lift bricks several times larger than themselves! An adventurer running into a large group of these monsters should be cautious!
Some Micro-Goombas are loyal to the Koopa Troop, but many are wild, and they like to form small tribes. The tribes often team up with more powerful monsters such as Paragoombas, adding them to their tribe.

EVOLUTION: Micro-Goombas have changed a lot over the years, and they are pretty rare, so it is difficult to tell if they are even the same species from one adventure to the next. Some appear to be baby Goombas, while others appear to be a tiny sub-species of Goomba. They first appeared in Super Mario Bros. 3, where they were about 1/4 the size of a regular Goomba. They had tiny eyes with huge eyebrows.
Their appearance didn't change much in Super Mario RPG, although they had darker coloured heads, going from tan to dark brown. They were also renamed to Goombette!
In Super Mario 64, Micro-Goombas are even smaller, only about the size of Mario's foot. Otherwise, they look exactly like regular Goombas. The compendium doesn't have a picture of the Super Mario 64 Micro-Goombas right now.