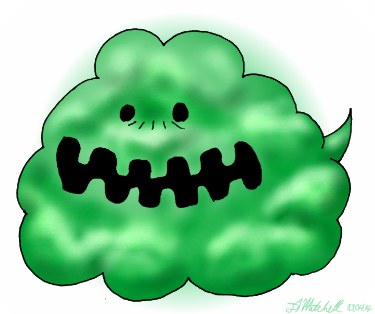 STRENGTHS: He is invisible and impossible to hit until you do something to him.

WEAKNESSES: After he is made visible he is weak against normal attacks.

BACKGROUND: Mokura is a mysterious gaseous monster that lives in Land's End. Some claim that there is more than one of these monsters, others claim that Mokura cannot be completely defeated and always re-forms sometime after being beaten. He can make himself almost invisible, thus avoiding physical attacks.
Mokura has no affiliations, it works alone and never with any other monsters. Mokura is very dangerous to inexperienced travelers, but it is also rare to run into Mokura, and you normally have to chase him to get him to do battle with you.