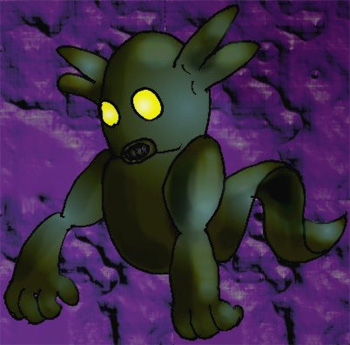 BACKGROUND: Shadows often appear alongside The Big Boo and Hobgoblins in Kero Sewers, but they have also been discovered haunting some castles and ghost houses.
They have dark, human-like torsos, with no legs. If they fight, they can be quite dangerous for the uninitiated adventurer. However, some Shadows just like to play ghostly tricks on humans and mushroom people. As you can see by the quote below, they're always ready for a (good?) joke.
While no conclusive evidence has been found, some believe that these creatures have sworn alliegence to Belome, the sewer-inhabiting monster. Until more evidence is found, they are considered to have no affiliations.