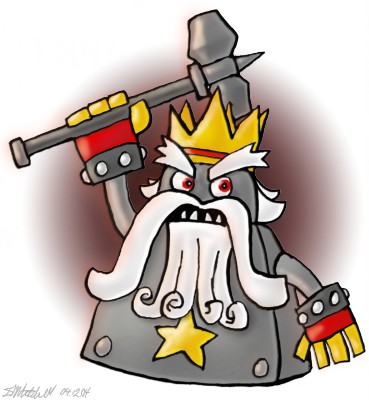 BACKGROUND: The leader of the Smithy Gang. Smithy and his gang attacked and broke the Star Road and then invaded the Mushroom Kingdom to search for the broken pieces of the road.
No one knows exactly who Smithy is, but it is known he's a mechanical genius and seems like more than just an evil robot. Smithy also has outfitted himself with a transformation move that's a sort of head roulette; it allows him to use many more attacks than any one of his heads would on its own.
Mario and friends defeated Smithy and broke up his gang. Smithy was last seen surprisingly participating in the victory parade held by the Mushroom Kingdom for his own defeat, along with his top lieutenants.