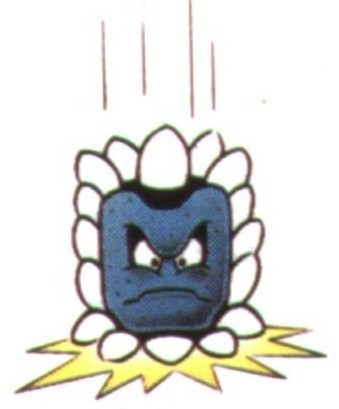 WEAKNESSES: They're stupid and predictable.

BACKGROUND: These creatures are huge blocks of stone brought to life by the black magic of the Koopa Troop. They're usually blue, and usually have pointy rock "spines" sticking out all around them.
Bowser first had these creatures brought to life around the time he attempted to take over the Mushroom World by having his Koopalings steal the magic wands from the Seven Kings. He meant to use them as "smart" traps in his fortresses. The incantation cast by his team of Magikoopas was so powerful, though, that it reached out beyond the intended area, and enchanted some stones that were unintended. This resulted in the creation of a few wild Thwomps which can usually be found in mountains or caves. However, most Thwomps are tame, and can only be found in Koopa territory.
All Thwomps, be they wild or tame, follow a similar pattern: They hover in the air, watching for someone to pass by, then THWOMP! They attempt to crush them. They don't pay any attention to what's going on below them when they're moving up, so sneak by them then.
It's interesting to note that Thwomps seem to be getting dumber. They used to wait for someone to come nearby before attacking, but many now just attack in a regular pattern. Some observers think thtat the spell Bowser had cast on them is wearing off.

EVOLUTION: Thwomps first appeared in Super Mario Bros.3, and except for their eyes, they looks surprisingly close to the drawings (see the drawing above - it comes from the SMB3 manual)
In Super Mario World, Thwomps changed colour to grey. Like many creatures that changed at the time, it is assumed that this was a one-generation mutation, although that is questionable, since Thwomps don't breed. Another theory is that Bowser had a new batch of Thwomps made in Dinosaur Land, and the different properties of the stone there caused the unusual colouring.
In Super Mario RPG, they returned to their original look, and they were done quite nicely, I must add. Many of the characters in that game feel overly geometric to mee, but Thwomps came out very well, probably partially because they're more or less block-shaped to start with.
Super Mario 64 brought them back, but they were a bit funny looking, because all the spikes had been removed from them. It is possible that this is another new batch made by Bowser after he entered the painting worlds of that game. (Actually, the truth is, they probably didn't have enough polygons, but that's another story...)