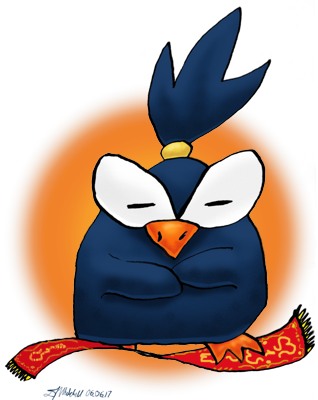 STRENGTHS: They fly in weird patterns.

BACKGROUND: Pidgits are flightless birds. To counter this problem, they use magic carpets. Although they are thought to originally work for Wart, due to them appearing in Mario & Luigi: Partners in Time (past) it is questionable where their loyalties lie. It is also questionable where they got their carpets from, as Partners in Time takes place roughly just after Yoshi's Island and before Yoshi's Story – a very early time in Mario's childhood and Subcon hasn’t even been invaded yet!

EVOLUTION: In the original SMB2, they were black and rode around on red carpets. In Wario’s Woods, they are regular, black birds that drop enemies. They eventually became blue when they returned in the Super Mario All-Starts version of SMB2. They reappeared slightly bitmapped-enlarged, kinda rubbish looking n SSBM They were basically oversized versions of the orignals. In Mario & Luigi: partners in Time, these bird-brains are actually much nicer-looking then their SMB2 counterparts.