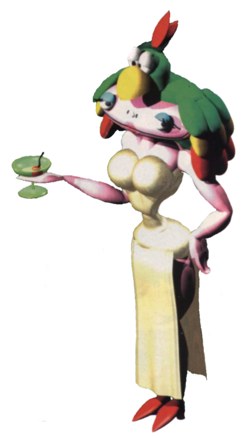 WEAKNESSES: None but her vanity.

BACKGROUND: Valentina became an aide in the court of King Nimbus some years after the disappearance of Prince Mallow. With a sharp political wit and a conniving mind, Valentina worked her way up in the ranks of the castle and eventually hatched a plot to take over the castle by imprisoning the King and Queen and passing off her servant, Dodo, as Prince Mallow. Unfortunately for Valentina the real Mallow came along with his friends and spoiled her plans.
Valentina escaped and her current whereabouts are unknown. She's vain and considers herself an expert in all high-class affairs. She also has a strange obsession with birds: she keeps many around and wears a very unusual green parrot-like hat on her head. Valentina is not a very dangerous physical fighter, preferring to rely on her brains and assistance from Dodo. She has a decent knowledge of magic too.
Valentina has been pursuing a marriage with Booster ever since she discovered that he's incredibly wealthy but he isn't ready for the commitment.